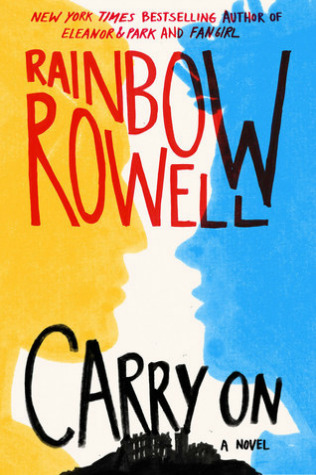 I’m late. I know, but you know what, even if i found this tag in June, I’d still be amping up to do it. It’s just one of the many great features of ignoring the rules. There’s also the fact to consider that I wasn’t tagged, and I’m doing it anyway. (I know, how rebellious of me!) Now to save you from having to transition into a rebellious soul, I’m just going to let you know that you’ve been tagged. It’s official, ’cause I said so.

Anyways, welcome to the part where I ignore most of the rules, give credit where it’s due (Bookables is amazing. I love her on her YouTube channel. Definitely have a look at her channel! )

How many books are you planning to read in 2020?

Welll, hopefully 100! But it’s more of a dream, I don’t really think it’s too much of a reality at this present moment. I’ve set my Goodreads goal to 75 (I’m trying to be realistic) because I normally read around 50 books a year and I want to amp that up a bit this year. You know?

1: Carry On by Rainbow Rowell

Simon Snow is the worst Chosen One who’s ever been chosen.
That’s what his roommate, Baz, says. And Baz might be evil and a vampire and a complete git, but he’s probably right.
Half the time, Simon can’t even make his wand work, and the other half, he starts something on fire. His mentor’s avoiding him, his girlfriend broke up with him, and there’s a magic-eating monster running around, wearing Simon’s face. Baz would be having a field day with all this, if he were here — it’s their last year at the Watford School of Magicks, and Simon’s infuriating nemesis didn’t even bother to show up.

2: The Bone Witch by Rin Chupeco

In the captivating start to a new, darkly lyrical fantasy series, Tea can raise the dead, but resurrection comes at a price.When Tea accidentally resurrects her brother from the dead, she learns she is different from the other witches in her family. Her gift for necromancy means that she’s a bone witch, a title that makes her feared and ostracized by her community. But Tea finds solace and guidance with an older, wiser bone witch, who takes Tea and her brother to another land for training.In her new home, Tea puts all her energy into becoming an asha-one who can wield elemental magic. But dark forces are approaching quickly, and in the face of danger, Tea will have to overcome her obstacles and make a powerful choice.

In a land where three suns almost never set, a fledgling killer joins a school of assassins, seeking vengeance against the powers who destroyed her family.
Daughter of an executed traitor, Mia Corvere is barely able to escape her father’s failed rebellion with her life. Alone and friendless, she hides in a city built from the bones of a dead god, hunted by the Senate and her father’s former comrades. But her gift for speaking with the shadows leads her to the door of a retired killer, and a future she never imagined.
Now, Mia is apprenticed to the deadliest flock of assassins in the entire Republic—the Red Church. If she bests her fellow students in contests of steel, poison and the subtle arts, she’ll be inducted among the Blades of the Lady of Blessed Murder, and one step closer to the vengeance she desires. But a killer is loose within the Church’s halls, the bloody secrets of Mia’s past return to haunt her, and a plot to bring down the entire congregation is unfolding in the shadows she so loves.
Will she even survive to initiation, let alone have her revenge?

4: The Hate U Give by Angie Thomas

Sixteen-year-old Starr Carter moves between two worlds: the poor neighborhood where she lives and the fancy suburban prep school she attends. The uneasy balance between these worlds is shattered when Starr witnesses the fatal shooting of her childhood best friend Khalil at the hands of a police officer. Khalil was unarmed.
Soon afterward, his death is a national headline. Some are calling him a thug, maybe even a drug dealer and a gangbanger. Protesters are taking to the streets in Khalil’s name. Some cops and the local drug lord try to intimidate Starr and her family. What everyone wants to know is: what really went down that night? And the only person alive who can answer that is Starr.
But what Starr does—or does not—say could upend her community. It could also endanger her life.

5: Eliza and Her Monsters by Francesca Zappia

Her story is a phenomenon. Her life is a disaster.
In the real world, Eliza Mirk is shy, weird, and friendless. Online, she’s LadyConstellation, the anonymous creator of the wildly popular webcomic Monstrous Sea. Eliza can’t imagine enjoying the real world as much as she loves the online one, and she has no desire to try.
Then Wallace Warland, Monstrous Sea’s biggest fanfiction writer, transfers to her school. Wallace thinks Eliza is just another fan, and as he draws her out of her shell, she begins to wonder if a life offline might be worthwhile.
But when Eliza’s secret is accidentally shared with the world, everything she’s built—her story, her relationship with Wallace, and even her sanity—begins to fall apart.

Name a genre you want to read more of?

I don’t necessarily have a particular genre that I want to read more of. I do want to branch out, so I guess I’d like to read more non-fiction (with a focus probably on true crime or nature and wildlife), literary fiction (I read Eleanor Oliphant is Completely Fine last year, and loved it), and maybe even some more crime/thriller novels. I always love the YA thrillers that come out, that maybe I should give the adult ones a try.

What’s a book you’ve had forever that you still need to read?

Ohhh, I could list WAY more than one. I’m pretty sure 50% of my bookshelves could make this list. However, I’m going to say that Priestess of the White by Trudi Canavan is the one that takes the cake. My brother purchased this badboy for me for my 18th birthday… I’m now going on 25. That’s along time to just stare at a book.