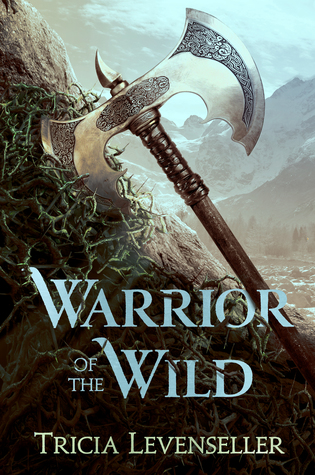 Goodreads Description:
How do you kill a god?
As her father’s chosen heir, eighteen-year-old Rasmira has trained her whole life to become a warrior and lead her village. But when her coming-of-age trial is sabotaged and she fails the test, her father banishes her to the monster-filled wilderness with an impossible quest: to win back her honour, she must kill the oppressive god who claims tribute from the villages each year or die trying.

I remember reading Tricia Levenseller’s debut novel, Daughter of the Pirate King, and absolutely falling in love with it. I was obsessed, needing the sequel almost instantly after it. It was very much a GIMME! GIMME! GIMME! situation. When I learned that she was release a new book, a standalone about a warrior, I was intrigued. I needed this book by an author I know I love. I found it among the audiobook selection upon release and dove headfirst into this world.

At first I was in love. It was amazing, with the same badassery as the first book but as I continued on, I noticed a pattern. It was predictable and all of the village people were painted grey. They had no depth, no personalities beyond the 2D descriptions they were given. I had a vague idea where the book was headed, and I was disappointed to learn that I was right.

Those she meets out of the village, they’re different. They have depth and character and actually felt like real people. I could see the time Tricia took weaving those characters into the perfect pieces they needed to be for the story. They grew and flourished, but never changed enough to become unbelievable. Those characters were a vast improvement over the initial beginning.

The plot, despite being predictable, was good. It was unique. A strange concept, considering I had picked what would happen. The beginning was good and the end even better, but the middle left me desiring something more. Something exciting, something to raise my pulse or have me laughing. It was missing the final jewel on the bracelet. It’s pretty, but not extraordinary.

I did enjoy this novel. It took me a little longer to get through than I would have liked, but it was defintely still a good read. More than happy to read anything else Tricia Levenseller is to write!

One thought on “WARRIOR OF THE WILD – Tricia Levenseller (Honest Review)”